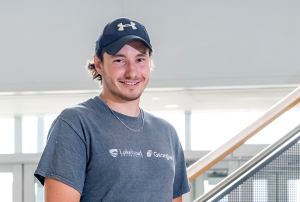 Engineering student Matthew Schraa says it was his high school guidance counsellor who suggested he apply to the Lakehead-Georgian collaborative program in electrical engineering, but it was the hands-on component that caught his eye.

“In high school, I took a lot of tech classes, and I did a co-op in residential wiring,” says the 22-year-old Schraa, who grew up on a farm in Fordwich, Ontario, two hours southwest of Barrie. “I like working with my hands, as well as learning the theory behind how things work, and wanted to combine those interests—as soon as I saw this program, I knew I had to apply.”

Schraa just completed a co-op through Lakehead-Georgian, an optional placement ranging in duration from four to 16 months, taken between students’ third and fourth year of classes.

He opted for the full 16-month co-op and was placed at local Barrie engineering firm Innovative Automation, helping the company create automated manufacturing and quality assurance solutions that are often robotic in nature, such as machines that assemble electronic and automotive parts as well as pharmaceutical and medical devices.

Schraa says he met their Vice-President of Sales, Matthew Setterington, at a Lakehead-Georgian open house. Setterington is also a Lakehead engineering alumnus and has been an enthusiastic supporter of the collaborative program with Georgian College since it launched for students in 2017.

“I mentioned that I was part of my high school robotics team, and Matt invited me for a tour of Innovative Automation,” says Schraa, who worked in the company’s robotics programming department, including working with a Programmable Logic Controller, or PLC, a specialized computer used for industrial automation. “The rest is history.”

Schraa says the job involved a large computer programming component, but also a lot of hands-on work. And with several other co-op students working alongside him and a team of engineers that supervise their work, there was plenty of opportunity for mentoring and practical learning.

“You have to understand the code, and also write the code based on how the machine is wired,” he says. “We are always working around the machine, teaching the machine, trouble-shooting, so it’s a lot of going back and forth between coding and working directly with the machine—it’s all pretty cool.”

Schraa will return to Lakehead-Georgian this fall to complete his final year of the program and says he’s looking forward to being back on campus for in-person classes, intramural hockey, and re-connecting with his peers and professors.

The smaller class sizes, he says, means he knows all the other engineering students in the cohorts ahead of and behind him, and that his professors know each of them too—a definite bonus in his mind for a university experience.

“We all met on day one and we’ve been friends since, so we can talk to each other and lean on each other like a family,” says Schraa. “And in small classes like this, there is always time to answer your questions, everyone’s questions, and it often feels more like a conversation than a lecture.”

As he looks ahead to graduation next year, Schraa says he’s still deciding if he wants to continue his academic career with graduate school, or step straight into full-time work. Either way, he says the program has prepared him for success.

“It’s so valuable, the hands-on experience we are given,” says Schraa. “We take a class and learn the theory and then we get to go to the lab and wire and build and play with circuits.

I love what I do, and in this industry, an education that encourages an experimental approach is certainly an advantage—as engineers, we know we’ll always be learning, and that we’ll never be bored.”