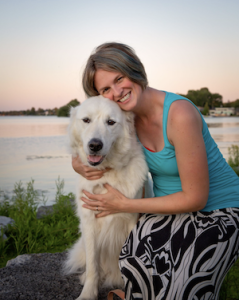 Julia Johnston is not a typical university student, but that’s what makes her such a dynamic member of the Lakehead Orillia campus.

“My entire family sang in church and community choirs,” she says. “My dad – who we lost to cancer in 2014 – and my mom taught us that music and the arts are powerful things.”

Julia took their lessons to heart. She attended the Randolph College for the Performing Arts, a Toronto Theatre School, and then founded two performing arts schools of her own.

“For the past 12 years, I’ve been offering vocal and drama training to all ages, including adults,” she says. “It’s my joy and my passion.”

Lately, though, Julia hasn’t been content with being a triple threat in the theatre world.

In 2019, she took an environmental management course at the University of Toronto. The experience prompted her to enrol in the Lakehead-Georgian Partnership’s environmental sustainability degree-diploma program.

It may seem like a big leap from the performing arts to the sciences, but according to Julia, “I’ve been a tree hugger and avid environmentalist all my life.”

In the summer of 2021, at the end of her first year, Julia saw an opportunity to apply her newly acquired fieldwork techniques after spotting a group of invasive plants called Phragmites australis in Orillia’s Tudhope Park.

Phragmites australis, also called European common weed, is one of the biggest threats to North American wetlands and waterways.

It arrived in Canada from Eurasia in the 1930s – probably from ballast water in ships travelling down the St Lawrence seaway. Now, this weed is spreading rapidly and endangering plants and wildlife.

Phragmites australis, which grows to nearly 20 feet tall, wreaks havoc by suffocating the ground so that other vegetation can’t grow and by sucking up water and creating islands in fragile wetland areas. Besides making it inhospitable for other plants, this weed also drives away native insects, birds, and reptiles.

She knew that she had to take action and slow its spread in Simcoe County.

Removing the weed from Tudhope Park, however, was a more complicated endeavour than she anticipated. She had to secure permission from the city, find volunteers, and pay for proper equipment to remove the plants.

When Julia and her volunteers finished weeding Tudhope Park, they moved their activities to city property used to store road sand and cleared a 500-600 metre section of Phragmites australis that had popped up.

All of this hands-on work is great preparation for what Julia wants to do when she graduates.

“I have a deep desire to work for the Nature Conservancy of Canada, specifically in invasive species ecology with a focus on education, because I have a special connection with kids.”

Originally published by the Lakehead University Alumni Association in March 2022.