In this month’s Faculty Spotlight, we’re speaking with Jaret Wright, professor of Computer Studies at Georgian College, and instructor in the Computer Science program with the Lakehead-Georgian Partnership. 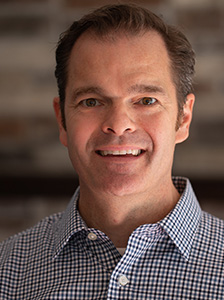 Jaret Wright, professor of Computer Studies with Georgian College, since 2011, comes to the Lakehead Georgian Partnership by way of the private sector. Prior to joining the college, Jaret was a Director of Engineering for Lyris Technologies which was his unexpected pathway into education.

“The co-op students I hired told their co-op advisors that it was an amazing experience,” Jaret says. “Georgian College called wanting to know what we were doing that was so impactful.”

He had partnered the co-op students with his top developers and gave them a supported pathway to quickly develop the necessary skills for their role.  This included getting students involved with supplier meetings and giving them ownership over various components. “For the first few co-op students they were the lead person driving the automation of our front end testing. They could write on their resume that they streamlined a process by over 500 per cent.”

“Coding is far more complex than typing commands into a keyboard.  Exceptional coders have to be strong communicators and really understand their clients’ requirements.” Jaret involved students in important projects that inspired, educated and helped prepare them for the real world.

Georgian College asked Jaret to join their advisory committee and he enjoyed the experience so much he became hooked on the education sector. “It was a seismic shift,” he says.

Jaret brings his private sector experience to his classes by using what he learned to set his students up for success. He starts many of his courses by performing a “lessons learned” exercise to understand what students want in a course. “Then we build a partnership,” he says. “I glean a lot from the experience, we set expectations and then I create a contract.”

Jaret teaches what made him successful in business such as bringing Project Management best practices into larger assignments. Projects are often broken into smaller, easier to understand components (the work breakdown structure in PM terms).  There is a clear focus on expectation setting. “All my assignments have detailed rubrics and I teach them that deadlines matter. I want them to be confident, competent and successful in their working lives.”

In business, there is often no room for excuses, he explains. “A company may have already completed marketing a launch or a new service, things need to be on time.”  He explains how and when to negotiate on timelines using practical examples from his business experience.

Jaret is proud of what Lakehead-Georgian Partnership students are already achieving. He tells the story of a second-year student who has created an Android application that connects with Steam—a popular online game platform. The application supports Google authenticated users, live data and gives users a rich, visual experience. The student will be publishing his work on the Google Play App Store.

“Android development is complex and requires a deep understanding of its architecture, so I was excited to see his response when I helped him through a technical hurdle,” Jaret says. “Seeing a student get excited about what they can do—that is why I love what I do.”

When Jaret isn’t working, he is still a pretty busy guy. “I am a photography enthusiast. I take a lot of action, landscape and portrait shots.” Jaret’s work has been published by Alpine Ontario and the Nik Zorcic foundation.

There’s a reason why Jaret’s photography is often related to skiing. “My wife (Melanie Smith) is an incredible overachiever. In addition to being a Portfolio Manager for RBC Dominion Securities, she also raced with the Canadian Masters in the Winter World Masters Games hosted in Austria.”

The apple apparently doesn’t fall too far from the tree, as Jaret’s 16-year-old son is also a downhill ski racer and avid golfer. “My son destroys all of us (in a game of golf). I’m the low bar in terms of family achievements,” he laughs.