In this month’s faculty profile we’re sitting down with Dr. Amir Ameli, assistant professor in the Department of Electrical Engineering at Lakehead University and the Lakehead-Georgian Partnership. 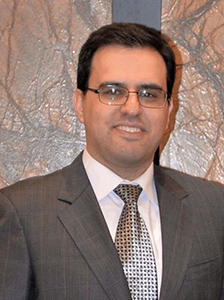 Dr. Amir Ameli was planning on moving from Kitchener to Barrie for his new position with the Lakehead-Georgian Partnership and then COVID-19 hit. “When I started my position at Lakehead, the campus was closed so I didn’t move,” he says. “However, in the fall I am going to be there.”

Dr. Ameli is an assistant professor, teaching undergrad courses for the Lakehead-Georgian Partnership, that include electric circuitry, control systems theory and power systems. “I have these three courses for now, but others will be added,” he says. “My area of specialization is power systems.”

Earning his PhD at the University of Waterloo, in 2019, Dr. Ameli worked as a post-doctoral fellow at the same university for one year. During his time at Waterloo, he received several awards including three Faculty of Engineering awards, one Best Speaker award, a PhD completion award and a graduate research assistance award. Additionally, he has been recognized as one of the five best reviewers for the IEEE Transactions on Smart Grid and an exceptional reviewer for IEEE Transactions on Power Delivery in 2020.

One of the most welcome changes from his past position is the smaller class sizes through the Lakehead-Georgian Partnership. “It’s a better synergy between instructors and students. I feel that teaching is easier in this program because there is something like a friendship between me and my students. I feel more comfortable.”

Dr. Ameli has noticed a significant difference in the calibre of learning in the partnership program. “I was the supervisor for the first group of students graduating this term,” he says. “I felt the project that the students are doing now is heavier than most undergraduate students do and they are performing it in a really good way. I was really surprised at their performance.”

The Lakehead-Georgian Partnership is unique in its focus, Dr. Ameli feels, as the earned combination of diploma and degree gives a much more hands-on experience. “Students of this program will have a better vision about practical aspects of electrical engineering as opposed to students who have only passed the theoretical courses.” For example, in one of Dr. Ameli’s classes, students learn about robotics and programmable logic controllers in a lab, which he believes is not common in most programs. “This is one of the benefits of the program.”

When Dr. Ameli isn’t working, he is spending time with his structural engineer wife, Parisa, and their young son, Sam, who was born in November of 2020.